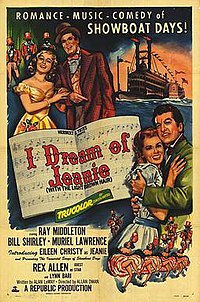 I Dream of Jeanie is a 1952 American historical musical film based on the songs and life of Stephen Foster who wrote the 1854 song "Jeanie with the Light Brown Hair" from which the title is taken. The film was directed by Allan Dwan for Republic Pictures and was shot in Trucolor.

In 1849 the song Oh, Susannah is a nationwide hit—but bookkeeper Stephen Foster has given his work to several music houses without charge and without credit. His refined true love Inez McDowell, a classically trained singer, despises popular music, especially Stephen's songs. Foster's world changes when Edwin P. Christy sets him straight on the music business and launches his career as an author of the songs the Christy Minstrels use in their shows.