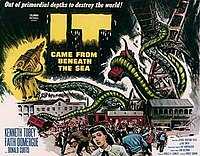 It Came from Beneath the Sea is a 1955 American horror science fiction giant monster film from Columbia Pictures, produced by Sam Katzman and Charles Schneer, directed by Robert Gordon, that stars Kenneth Tobey, Faith Domergue, and Donald Curtis.

A nuclear submarine on maneuvers in the Pacific Ocean, captained by Commander Pete Mathews (Kenneth Tobey), comes into contact with a massive sonar return. The commander attempts to outrun and outmaneuver the sonar object, but cannot. The boat is disabled but manages to free itself and return to Pearl Harbor. Tissue from a huge sea creature is discovered jammed in the submarine's dive planes.