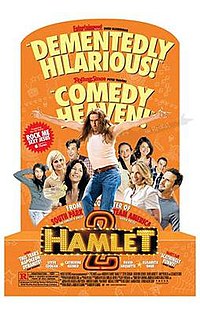 Hamlet 2 is a 2008 American comedy film directed by Andrew Fleming, written by Fleming and Pam Brady, and starring Steve Coogan, Catherine Keener, Amy Poehler, and David Arquette. It was produced by Eric Eisner, Leonid Rozhetskin, and Aaron Ryder. Hamlet 2 was filmed primarily at a New Mexico high school from September to October 2007. The film premiered at the 2008 Sundance Film Festival and was distributed by Focus Features.

Dana Marschz is a recovering alcoholic and failed actor who has become a high school drama teacher in Tucson, Arizona, "where dreams go to die". Despite considering himself an inspirational figure, he only has two enthusiastic students, Rand Posin and Epiphany Sellars, and a history of producing poorly received school plays that are essentially stage adaptations of popular Hollywood films (his latest being Erin Brockovich). When the new term begins, a new intake of students are forced to transfer into his class as it is the only remaining arts elective available due to budget cutbacks; they are generally unenthusiastic and unconvinced by Dana's pretensions, and Dana comes into conflict with Octavio, one of the new students.