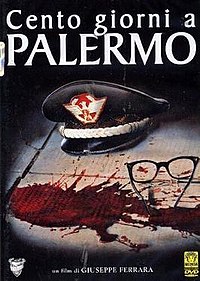 One Hundred Days in Palermo 1984

One Hundred Days in Palermo is a 1984 non-fiction film directed by Giuseppe Ferrara with Giuseppe Tornatore as screenplay writer. The film is a France/Italy coproduction and tells about the last hundred days in the life of the Italian "Generale dei Carabinieri" and anti-mafia highest authority Carlo Alberto Dalla Chiesa as prefect of Palermo, the capital of the Italian island of Sicily. Dalla Chiesa's life ended with his barbaric murder, shot by the machine guns of a mafia squad (along his wife and his bodyguard) on September 3, 1982.