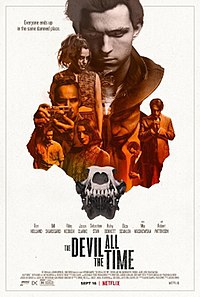 The Devil All the Time is a 2020 American psychological thriller film directed by Antonio Campos, from a screenplay co-written with his brother Paulo Campos, based on the novel of the same name by Donald Ray Pollock, who also serves as the film's narrator. The cast includes Tom Holland, Bill Skarsgård, Riley Keough, Jason Clarke, Sebastian Stan, Haley Bennett, Harry Melling, Eliza Scanlen, Mia Wasikowska and Robert Pattinson, whose characters' stories weave together.

During World War II, while serving in the Solomon Islands, U.S. Marine Willard Russell finds Gunnery Sergeant Miller Jones skinned and crucified by Japanese soldiers. Willard ends Jones's agony by shooting him behind the ear. After the war, on his way home to Coal Creek, West Virginia, Willard passes through Meade, Ohio, where he meets Charlotte, a waitress at a diner and a photographer named Carl Henderson. Willard and Charlotte marry and move to Knockemstiff, Ohio, where they have a son, whom they name Arvin.