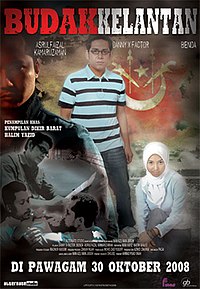 Budak Kelantan (Kelantan Boy) is a 2008 Malaysian drama film that captures the cultural relativism of Malaysians on Kelantanese migrant since urbanization of Kuala Lumpur. The main theme is a dramatization of a group of Kelantanese adults in their early 20s whom relocated to Kuala Lumpur, sets in 1990s, between the life of 2 long-lost friends from rural areas of Kelantan whom now are living in Kuala Lumpur and currently stand in difference social status. Some of the movie scenes were filmed strategically in one of many popular hangouts spot in Kuala Lumpur for both local and foreigners in 1990s, which are Central Market, , and defunct which are now less favored beginning the year of 2000 after a successful crowd-puller establishment of many newly opened shopping malls and tourist destination which mainly concentrated in other part of Kuala Lumpur including Bukit Bintang, Bangsar and Jalan Ampang. As Kelantan is the only longest ruling Muslim conservative state in Malaysia by Malaysian Islamic political party PAS, the film direction is considered 'brave' as it is so far the only local film that touches most notable taboo subjects regarding runaway teenage girls, gang-rape, procuring, substance abuse and religious infidelity, stereotypically portrayed as committed by Kelantanese adults. Despite the provoked film background from local Malaysian perspective, it offers a variety of morally complex, gripping and unsettling, flawless domestic portrait that its director aims to leave the questions and dilemmas for viewers with open-ended, according to his interview.

2 guys named Buchek and Jaha, met in Central Market, Kuala Lumpur after had never seen each other for the last 13 years. Buchek, who had just graduated from Universiti Malaya, working with his other friends in burger stall while waiting to get a decent job. Jaha, who had been studying in Henry Gurney Prisoners School at Melaka has been living in Kuala Lumpur for many years. In the earlier scene of this movies, Jaha is seen to encounter a guy who tries to rape a girl in the dark corner of the street.