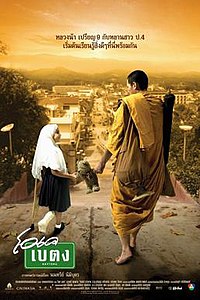 OK Baytong is a 2003 Thai drama film about Buddhist-Muslim relations in southern Thailand. It is written and directed by Nonzee Nimibutr.

Tum is a young man who has been a monk living in a Buddhist temple in Thailand since he was 5 years old. But after hearing that his sister has been killed in an attack on a train by insurgents, he decides to leave the monastery and make his way to southern Thailand where his sister ran a beauty salon in a town called Betong in a district in Yala Province on the border with Malaysia.