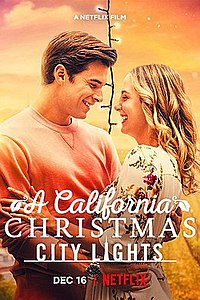 A California Christmas: City Lights is a 2021 American Christmas romantic comedy film created for Netflix, directed by Shaun Paul Piccinino, written by Lauren Swickard and starring Lauren Swickard, Josh Swickard and Amanda Detmer. It's a sequel to the 2020 film A California Christmas. It's story follows Callie and Joseph who one year after falling in love are now running a dairy farm and winery, however business and family obligations threaten their relationship as Joseph is called back to the city. In addition to Petaluma, California, the city where the original was filmed, the sequel also features scenes shot in San Francisco. The film was released on December 16, 2021.