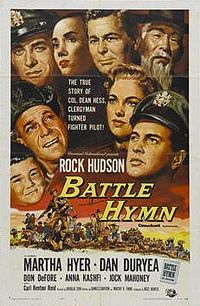 In the summer of 1950, one month after the invasion of South Korea, Dean Hess has been a small town minister in Ohio for two years. He has been suffering a crisis of conscience, however. He realizes he cannot continue as a priest, due to the overwhelming guilt he still feels from accidentally dropping a bomb on an orphanage and killing 37 children, when he was a fighter pilot in Germany during World War II. Hess volunteers to return to the cockpit, leaving his wife behind in Ohio. He promises her he won't see combat, he will be the senior USAF advisor/Instructor Pilot to the Republic of Korea Air Force, only serving as a teacher and flying F-51D Mustangs.