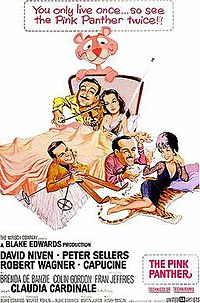 The Pink Panther is a 1964 American comedy film directed by Blake Edwards and distributed by United Artists. It was written by Maurice Richlin and Blake Edwards. It is the first installment in The Pink Panther franchise. Its story follows inspector Jacques Clouseau as he travels from Rome to Cortina d'Ampezzo to catch a notorious jewel thief known as "The Phantom" before he is able to steal a priceless diamond known as "The Pink Panther". The film stars David Niven, Peter Sellers, Robert Wagner, Capucine and Claudia Cardinale.

As a child in Lugash, Princess Dala receives a gift from her father, the Maharajah: the "Pink Panther", the largest diamond in the world. This huge pink gem has an unusual flaw: by looking deeply into the stone, one perceives a tiny discoloration resembling a leaping panther. Twenty years later, Dala (now played by Claudia Cardinale) has been forced into exile following her father's death and the subsequent military takeover of her country. The new government declares her precious diamond the property of the people and petitions the World Court to determine ownership. However, Dala refuses to relinquish it.