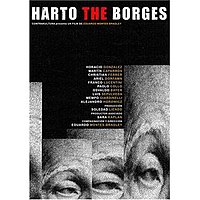 Harto The Borges is a documentary film by Eduardo Montes-Bradley. Harto The Borges explores the narcissistic side of Jorge Luis Borges, the author of El Aleph, his frequent and often criticized comments to the press, his distinctive and gentle ironies. Harto The Borges had a theatrical release in Buenos Aires in September 2000, and was well received by the critics. Since then has been frequently exhibited at forums, campuses, and film festivals. On October 4, 2011, Harto The Borges was presented at the University of Salamanca, and made available to the general audience in Argentina through the On Line version of Revista Cultura Ñ, (Diario Clarin) in Buenos Aires. The film was released alongside an article in which the director views the film ten years after its premier at the Cine Cosmos. The film is currently available in Vimeo . Harto The Borges was presented at the Festival Internacional del Nuevo Cine Latinoamericano, Havana, Cuba, 2000 and nominated for Premio Cóndor de Plata.