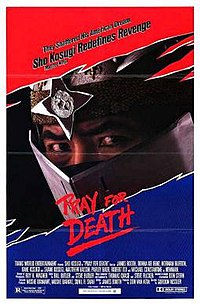 At the insistence of his American-born wife, Aiko, Yokohama salaryman Akira Saito decides to immigrate from Japan to the United States to raise their two sons Takeshi and Tomoya. Unbeknownst to his family, Akira is in fact a highly skilled ninja, who had faithfully protected the secrets of his temple minded by his adoptive father and sensei, Koga. Years before, Akira's brother, Shoji (also raised and trained by Koga) sought to steal from the temple while in disguise, forcing Akira to engage him in battle and kill him. Akira's meditation on this matter is disrupted by an attack from Koga to encourage him to wipe the guilt from his mind before it kills him. Akira announces his intentions to move to America to start a new life, to put the shadows of the ninja behind him. Koga makes him swear never to reveal their secrets, and gives him a ninja helmet as a gift, while reminding him he can never leave his shadows behind.