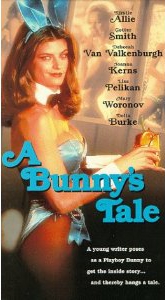 A Bunny's Tale is a 1985 American made-for-television comedy-drama film based on American feminist icon and journalist Gloria Steinem's experiences working as a Playboy Bunny in 1963, as described by her 1963 article "A Bunny's Tale"

Engaged by a magazine to write an investigative article on publisher Hugh Hefner's nightclub chain, Ms. Steinem poses as a young girl named "Marie" and enters the Bunny training program at the New York City Playboy Club. Outfitted with phony ears, a fuzzy tail, and a revealing costume, Gloria learns the proper method of serving drinks, the "bunny dip", and how to fend off customers who ignore Hefner's "look but don't touch" policy. She also concludes that being a sex object, even a chaste one, is depressingly demeaning—an "awakening".