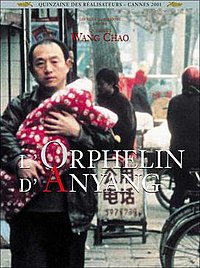 The Orphan of Anyang is a 2001 Chinese film from Sixth Generation writer-director Wang Chao. It is Wang's first feature film as director (he had previously served as an assistant director to Chen Kaige), and is based on a novel written by the director. The film constitutes the first part of a loose trilogy on life in modern China, followed by Day and Night (2004), and Luxury Car (2006). The film was produced by the independent Beijing-based Laurel Films, founded by screenwriter Fang Li. International distribution was by the French company Onoma.