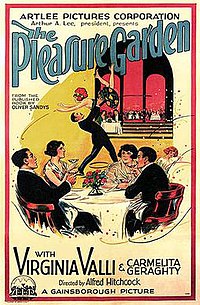 The Pleasure Garden is a 1925 British-German silent film directed by Alfred Hitchcock in his directorial debut. Based on a novel by Oliver Sandys, the film is about two chorus girls at the Pleasure Garden Theatre in London and their troubled relationships.

Jill, a young dancer, arrives in London with a letter of introduction to Mr. Hamilton, proprietor of the Pleasure Garden Theatre. The letter and all her money are stolen from her handbag as she waits to see him. Patsy, a chorus girl at the Pleasure Garden, sees her difficulty and offers to take her to her own lodgings and to try to get her a job. Next morning Jill is successful in getting a part in the show. Her fiancé, Hugh, arrives with a colleague called Levet. Hugh and Patsy become very close while Jill is being pursued by a number of rich men, eventually breaking up with Hugh in order to begin a relationship with the wealthy Prince Ivan. Not long after this, Hugh is sent to Africa by his company.