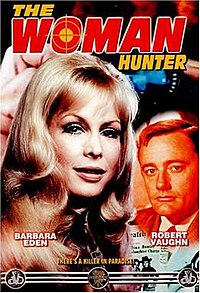 The Woman Hunter is a 1972 American made-for-television mystery film that premiered as the CBS Movie of the Week on September 19, 1972. The teleplay was written by Brian Clemens and Tony Williamson (the former's first and the latter's only American TV work), from a story by Clemens about a socialite's involvement with an international thief.

Dina Hunter (Barbara Eden), wealthy and unstable, takes a Mexican holiday with her husband Jerry (Robert Vaughn) in order for her to recover from a traffic accident. An artist named Paul Carter (Stuart Whitman) becomes intrigued by Dina and wants to paint her portrait. Dina's interest in him leads her to uncover clues that he is more than just an artist — she discovers that he may possibly be a jewel thief and murderer. She tries to convince her husband and the local authorities but no one will believe her story.