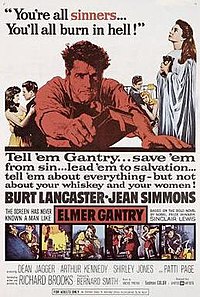 Elmer Gantry is a 1960 American drama film about a con man and a female evangelist selling religion to small-town America. Adapted by director Richard Brooks, the film is based on the 1927 novel of the same name by Sinclair Lewis and stars Burt Lancaster, Jean Simmons, Arthur Kennedy, Shirley Jones and Patti Page.

Elmer Gantry (Burt Lancaster) is a hard-drinking, fast-talking traveling salesman with a charismatic personality who infuses biblical passages and fervor into his pitches as a way to ease and collect money. He is drawn to the roadshow of Sister Sharon Falconer (Jean Simmons) and is immediately attracted to the revivalist's saintly aura. As the troupe leaves town for Kansas, Gantry sweet talks her naive assistant, Sister Rachel (Patti Page), into disclosing information regarding Falconer's past, which he uses to con his way into her good graces. He joins the troupe preaching "Christ in commerce" and how he is a saved salesman.