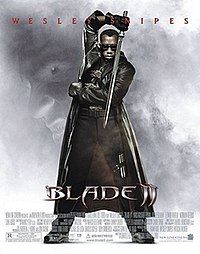 Blade II is a 2002 American superhero horror film based on the fictional character Blade from Marvel Comics, directed by Guillermo Del Toro and written by David S. Goyer. It is a sequel to the first film and the second part of the Blade film series, followed by Blade: Trinity.

In 1999, two years after the events of the previous film, Blade searches Prague for his mentor Abraham Whistler, who was thought to have died after being attacked by Deacon Frost and his vampire pack but was instead turned into a vampire. Blade discovers Whistler being held at a vampire safe house. After returning to their headquarters, Blade gives Whistler an accelerated retro-viral serum to revert him back to human. Whistler meets Scud, Blade's new weapons and vehicle technician.