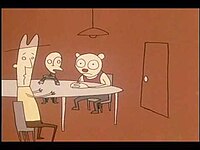 Mister Smile is a 1999 American animated short film directed by Fran Krause while he was attending Rhode Island School of Design. It won several awards in independent film festivals. The story follows a variety of characters who are all invited to a party at the home of Mister Smile.

Two men and a bear cower in their tree house home, awaiting the arrival of their newly ordered robot. Meanwhile, a bird drives home to his human wife. That night, he dreams about the childhood moment when he realized that he has fingers instead of wings - a discovery that prompted him to become a salesman. A monkey paces in the waiting room of a nearby hospital, as a chicken is called back to see the doctor. The doctor zaps the chicken with a shrinking machine, and after putting the chicken into a syringe, injects her into the monkey. Around this time, a squirrel and an old man play a game together, within their shared apartment complex. The squirrel removes the old man's dentures and hides them from him. The old man then tries to guess where his dentures are.