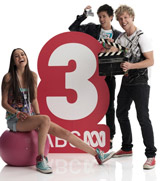 Studio 3 was an Australian children's television block, which was premiered on ABC3 along with the channel's launch in 2009. The program premiered on 7 December 2009, originally presented by Amberley Lobo and Kayne Tremills. The block was composed of small hosted segments which serve as links between external programs on the channel. The show was removed when ABC3 rebranded as ABC ME on 19 September 2016. The final presenters were James Elmer, Grace Koh and Tim Matthews.