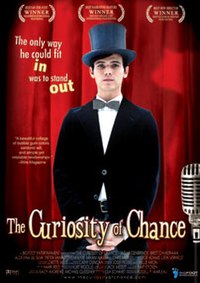 The Curiosity of Chance 2006

The Curiosity of Chance is a 2006 comedy film directed by Russell P. Marleau, produced by Bigfoot Entertainment and starring Tad Hilgenbrink.

In 1980s Europe, flamboyant and gay 16-year-old Chance Marquis shows up at an international high school in a top hat and tails, immediately attracting the attention of the "queer-hating" resident bully, among others. Through his involvement in the school newspaper, he meets an introverted photographer with a mysterious briefcase, and while practicing tennis, he befriends a catty fashionista, both of whom act as his wingmen in his new high school. He also meets the jock-next-door, with whom he forms a tentative friendship, despite the jock's cacophonous group of friends. The film follows Chance through a year of high school, with its attendant drama, successes, and hijinks—including sneaking into a drag bar, where Chance begins to explore his true self.