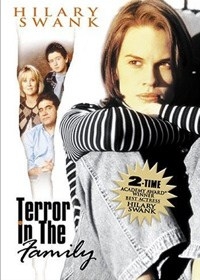 Terror in the Family is a 1996 American television film directed by Gregory Goodell and starring Joanna Kerns, Dan Lauria, Andrew Kavovit, Adam Hendershott, Nan Martin, Beau Billingslea, Ryan Christopher Mouritsen, Kathleen Wilhoite, and Hilary Swank. The film is about a parents' struggle with the raising of their teenage daughter whose rebellious temperament erupts into violence. Filming took place in Utah.

Deena Marten is a 15-year-old who has become a rebel since dating Garret Lexau, another rebellious teen who was suspended from school for hitting a teacher. Deena no longer keeps any of her promises, skips school and leaves the family home whenever she pleases. Her newfound harsh attitude upsets her mother, Cynthia, who once enjoyed a close relationship with her daughter. Cynthia is frustrated because the lines of communication have broken down between mother and daughter.