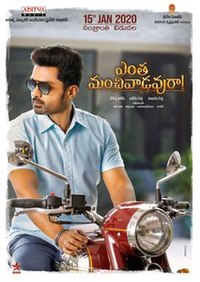 Entha Manchivaadavuraa is a 2020 Indian Telugu-language action drama film directed by Satish Vegesna. The film stars Kalyan Ram and Mehreen Pirzada, with the music composed by Gopi Sundar. The film has been jointly produced by Aditya Music’s Subhash Gupta and Umesh Gupta. It is an official remake of the Gujarati-language film Oxygen (2018). The film draws its title from an eponymous song of the film Nammina Bantu.

When her train halts at Yelamanchili due to a blockage, Nandini tells a group of women about her lover Balu in a flashback.