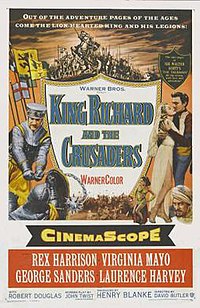 King Richard and the Crusaders 1954

King Richard and the Crusaders is a 1954 historical drama film made by Warner Bros. The film stars Rex Harrison, Virginia Mayo, George Sanders and Laurence Harvey, with Robert Douglas, Michael Pate and Paula Raymond. It was directed by David Butler and produced by Henry Blanke from a screenplay by John Twist based on Sir Walter Scott's 1825 novel The Talisman. The music score was by Max Steiner and the cinematography by J. Peverell Marley. This was Warner Bros.' first essay into CinemaScope. King Richard and the Crusaders was listed in the 1978 book The Fifty Worst Films of All Time.

The film begins with King Richard the Lionheart (George Sanders) planning to attack the Saracens and defeat their leader, Sultan Saladin (Rex Harrison). Little does Richard know, though, the Castelaine knights who are supposed to follow him have other plans of their own. Giles of Conrad (Robert Douglas), a Castelaine supporter, sets up an assassination attempt of the King using a poisoned Saracen arrow in hopes that the arrow will kill the King, frame the enemy, and allow Giles of Conrad to promote one of his own to overtake the Saracens and be the victorious ruler of the land. The assassination attempt fails, and King Richard is discovered to still be alive, just before a new leader is about to be named. At this time, Sir Kenneth of Huntington (Laurence Harvey) enters King Richard's camp, blaming Giles of Conrad and the Castelaine knights for the assassination attempt. Kenneth announces his loyalty to the King, but the King dismisses his thought that his own knights would assassinate him. The King then sends Kenneth to lead the Queen's caravan as a scout to prove his loyalty to the kingdom.