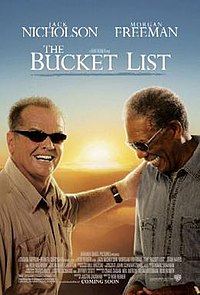 The Bucket List is a 2007 American buddy comedy-drama film directed and produced by Rob Reiner, written by Justin Zackham, and starring Jack Nicholson and Morgan Freeman. The main plot follows two terminally ill men on their road trip with a wish list of things to do before they "kick the bucket".

Two elderly men, blue-collar mechanic Carter Chambers (Morgan Freeman) and billionaire health care magnate Edward Cole (Jack Nicholson) meet for the first time in a hospital that Cole just bought after both have been diagnosed with terminal lung cancer. Cole wants a private room, but his own public statements, which state that in his hospitals, all rooms are double-occupancy for cost-efficiency, get in the way.