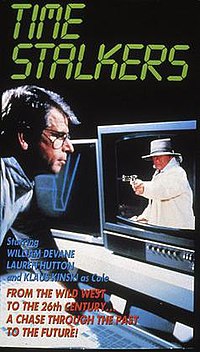 Timestalkers is a 1987 American made-for-television horror science fiction film directed by Michael Schultz and starring William Devane. The film is based on Ray Brown's novel The Tintype.

In 1986, Dr. Scott McKenzie (William Devane) is a college professor and ardent fan of the gunslinger culture of the Old West. A year ago, McKenzie watched his wife and son die in a car crash caused by a drunk driver attempting to flee the police. With his friend, General Joe Brodsky (John Ratzenberger), McKenzie attends an auction of Wild West memorabilia, where they agree to bid on a pair of steamer trunks and split the contents between them. As the auction is conducted, flashbacks show the items' histories in the 19th century. At the time a man, Joseph Cole (Klaus Kinski), is looking for a gunslinger who has a pair of distinctive ebony-handled pistols marked with stars. Some cowboys he encounters on the road point him towards the town of Crossfire, California. At the town saloon, he inquires about the man but is harassed by a trio of local thugs, one of whom shoots at him, hitting instead one of the trunks which Dr. McKenzie is bidding on in the present. Cole quickly shoots all three men dead, an event memorialized by a local photographer. In the present, McKenzie and Brodsky win the trunks at auction and McKenzie begins sorting through the contents, noticing the picture of the men who Cole killed.