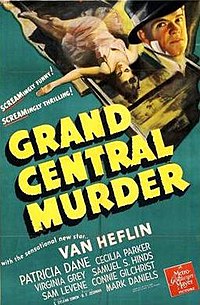 Grand Central Murder is a comedy/mystery film released in 1942. It was based on Sue MacVeigh's 1939 novel of the same name, and stars Van Heflin as a private investigator who is one of the suspects in a murder on a private train car in Grand Central Terminal. The film was directed by S. Sylvan Simon.

Convicted murderer "Turk" (Stephen McNally) escapes from police custody, crashing through a washroom window as a train pulls into Grand Central Station in New York. He telephones his former girlfriend, Broadway star Mida King (Patricia Dane), and threatens to kill her. She leaves her show between acts and hides in a private train car on a siding at the station, planning to leave town and marry her rich, high society fiance, David V. Henderson (Mark Daniels). However, her body is found by David and his ex-fiancee, Connie Furness (Cecilia Parker).