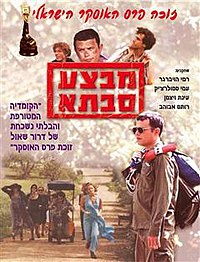 Operation Grandma (, Mivtza Savta) is a short 1999 Israeli satirical comedy about the military and kibbutz life directed by Dror Shaul. It was filmed on Kibbutz Yakum and based on the funeral of Esther Shaul (sister of Israel Galili). Esther was Dror's grandmother who was buried in Kibbutz Kissufim where Shaul was born and raised.

Three very different brothers Alon (34), a no-nonsense Israeli Army officer; Benni (30), a brilliant electrician; and Idan (22), a wimpy field trip guide navigate obstacles in an attempt to bury their beloved grandmother in the cemetery of her kibbutz, the fictional Asisim. Because Alon has a secret security operation set for that same day, they have to work on a tight schedule, so he plans it like a military operation (hence the title). A series of mistakes and mishaps complicate things.