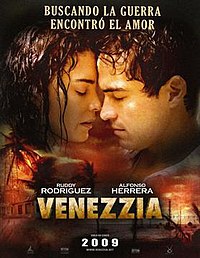 Venezzia is a 2009 Venezuelan drama film based on real events; the role of Venezuela during World War II and a love story.

War and espionage sets the stage for a star-crossed romance in this historical drama from director Haik Gazarian. It's early 1942, and the United States has finally joined the Allied cause in World War II after the attack on Pearl Harbor. Oil is a precious commodity needed to fuel fighter planes, battleships, jeeps and other vehicles, and when German U-Boats are sighted off the coast of Venezuela on the Caribbean Sea, it becomes clear something must be done to guard the nation's oil fields from Nazi attack. Frank Moore (Alfonso Herrera) is an American communications expert sent to the coastal village of Puerto Miranda to help keep tabs on German plans to attack the oil fields. Moore was given the assignment in part because his mother was Latino and he speaks Spanish, but this doesn't help him get along with his commander, the authoritarian and short-tempered Capt. Enrique Salvatierra (Rafael Romero). However, when Moore meets Venezzia (Ruddy Rodriguez), Salvatierra's beautiful wife, he's immediately infatuated, and when she reveals that she shares his attraction, they fall into a love affair that could jeopardize their futures as well as Moore's mission, especially when he's suspected of being a double agent.