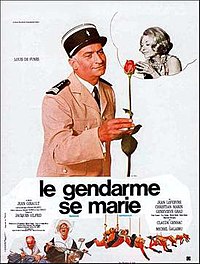 The Gendarme Gets Married 1968

The Gendarme Gets Married is the third installment of the Gendarmes series, starring again Louis de Funès and one more time Geneviève Grad as his daughter. This comedy film succeeds Gendarme in New York and is followed by three further installments.

The gendarme Cruchot meets the widow Josepha. They quickly fall in love. But Cruchot's daughter doesn't like Josepha and is determined to prevent the wedding by all means necessary.