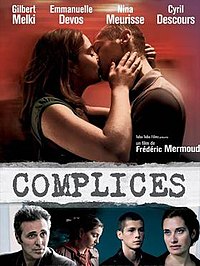 Accomplices (original title: Complices) is a 2009 Franco-Swiss crime thriller film directed by Frédéric Mermoud. The film premiered in competition at the 2009 Locarno International Film Festival. It won the Swiss Film Award for Best Screenplay in 2010.

Two police detectives in Lyon, both single and childless, are investigating the murder of a young man called Vince, whose body is found strangled in the river Rhône. It emerges that Vince was a high-end male prostitute, finding clients on the internet and meeting them in hotels. His girlfriend was a student Reb, who he recruited to join him in threesomes, so increasing his range of clients and his earnings. One encounter went wrong when the client started to get rough with Reb, upon which Vince beat him up and the two fled. Furious at the way Reb had been treated, Vince decided to blackmail the man and arranged a rendezvous on the top floor of a multi-storey car park. After handing over the money, the client then attacked Vince with a golf club, upon which Reb waded in with her motorbike helmet. Her blows killed the man, so the two hid his body in his car and fled. Vince's pimp then met him to claim his share of Vince's takings and a fight developed, in which the pimp strangled Vince and then dumped his body in the river. The detectives charge the pimp with murder but not Reb. As she is young, was in love with Vince, is pregnant with his child and her mother is standing by her, they doctor her statement to exonerate her.