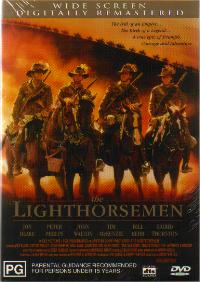 The Lighthorsemen is a 1987 Australian war film about the men of a World War I light horse unit involved in Sinai and Palestine Campaign's 1917 Battle of Beersheeba. The film is based on a true story and most of the characters in the film were based on real people. (Elyne Mitchell wrote the novelization based on the screenplay.)

The film follows four Australian cavalrymen (Frank, Scotty, Chiller, and Tas) in Palestine in 1917, part of the 4th Light Horse Brigade of the British and Commonwealth forces. When Frank is wounded and dies of his wounds, he is replaced by Dave. Dave finds himself unable to fire his weapon in combat and is transferred to the Medical Corps, where he will not need to carry a weapon, but where he will still be exposed to the fighting.