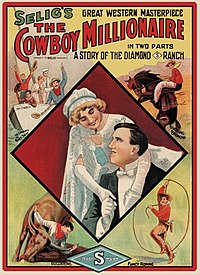 The Cowboy Millionaire is a 1909 American silent short western directed by Francis Boggs and Otis Turner. The film stars Tom Mix, Mac Barnes and William Garwood. It was the debut film of Mix and Garwood, as well as William Stowell.

Cowboy from Idaho gets letter from Chicago, reporting that his uncle died and left him a fortune of several million dollars.