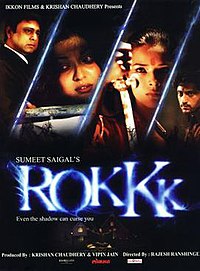 Rokkk is a 2010 Indian Hindi horror film starring Tanushree Dutta and Udita Goswami. It is the first time that these two actresses star in a movie together. The movie is directed by Rajesh Ranshinge. It is based on supernatural thoughts and inevitable emotions. The movie does not contain any songs, but there was a soundtrack.

The story narrates two female protagonists Anushka (Tanushree Dutta) and Ahana (Udita Goswami). Ahana and Anushka are sisters. Anushka is married to an elderly man; Ravi (Sachin Khedekar). He is a widower and ties the knot with her after his first wife, Pooja's unknown and untimely death. Anushka's mother refuses to accept their marriage. The couple begin their journey in a new home purchased by Ravi 2 years ago. Anushka's life takes an unexpected twist. She tells this to her husband who thinks that she is only hallucinating and they decide to go back to their previous home, but the horror does not seem to stop in this house either. Anushka suspects that Pooja (Ravi's first wife) is behind all of these nerve-wracking incidents.