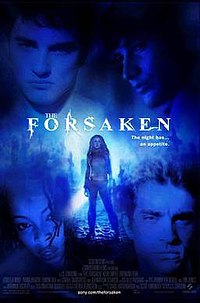 The Forsaken is a 2001 American horror film written and directed by J. S. Cardone and distributed by Screen Gems. The film stars Kerr Smith, Brendan Fehr, Izabella Miko, and Jonathan Schaech. Conceived as a road movie with vampire hunters, the story follows a young film trailer editor on a cross-country business trip through the Arizona desert who picks up a shady hitchhiker and along the way encounters a disoriented young woman who's being stalked by a vampire cult.