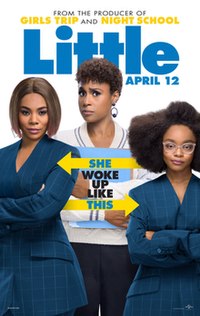 Little is a 2019 American fantasy comedy film directed and co-written by Tina Gordon. It stars Regina Hall, Issa Rae and Marsai Martin, and follows an overbearing boss who is transformed into the child version of herself. Martin serves as an executive producer for the film, and at 14 years old, is the youngest person to ever hold that title on a Hollywood production.

Bullied as a child, businesswoman Jordan Sanders has become the bully as she runs her own tech company like a dictator and treats her employees very poorly. After she behaves rudely towards a child using a toy magic wand, the child wishes that Jordan was a kid again