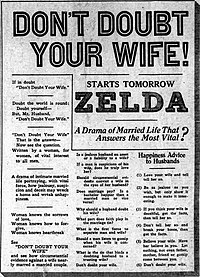 Don't Doubt Your Wife is a 1922 American silent drama directed by James W. Horne based on the story by Leah Baird and starring Leah Baird and Emory Johnson. The movie was released on March 12, 1922 by Associated Exhibitors.

Rose Manning, played by Leah Baird, is traveling home when a storm breaks out. She needs to take shelter and dry-off. She sees a nearby roadhouse and pulls-in. As luck would have it, taking refuge in the same lodge is an old boyfriend - Herbert Olden played by Emory Johnson.