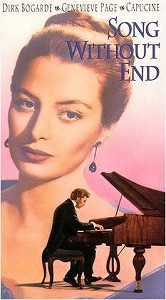 Song Without End, subtitled The Story of Franz Liszt (1960) is a biographical film romance made by Columbia Pictures. It was directed by Charles Vidor, who died during the shooting of the picture and was replaced by George Cukor. It was produced by William Goetz from a screenplay by Oscar Millard, revised (uncredited) by Walter Bernstein and based on screenwriter Oscar Saul's original 1952 script (uncredited). The music score was by Morris Stoloff and Harry Sukman with music by Franz Liszt, and the cinematography by James Wong Howe and Charles Lang (uncredited). The film also features music of those contemporaries of Liszt whom he unselfishly championed by featuring them in his numerous performances (e.g., Richard Wagner, Hector Berlioz, among others).