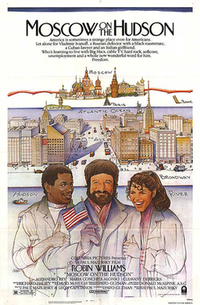 Moscow on the Hudson is a 1984 American romantic comedy-drama film written and directed by Paul Mazursky which stars Robin Williams as a Soviet circus musician who defects while on a visit to the United States. It co-stars María Conchita Alonso (in her film debut), Elya Baskin as the circus clown, Savely Kramarov as one of two KGB apparatchiks, Alejandro Rey as the musician's immigration attorney, and Cleavant Derricks as his first American host and friend.

Vladimir Ivanoff, a saxophonist with the Moscow circus, lives in a crowded apartment with his extended family. He stands in lines for hours to buy toilet paper and shoes. When Boris, the apparatchik assigned to the circus, criticizes Vladimir for being late to rehearsal and suggests Vladimir may miss the approaching trip to New York City, Vladimir gives Boris a pair of shoes from the queue that made Vladimir late. While Ivanoff is riding in his friend Anatoly's Lada, Anatoly stops to buy fuel for his car from a mobile black market gasoline dealer. While the friends wait for the gasoline seller to fill Anatoly's jerrycans, the two practice their English.