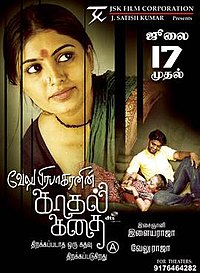 Kadhal Kadhai, also known as Velu Prabhakaranin Kadhal Kadhai, is a 2009 Indian Tamil language erotic romantic drama film written and directed by Velu Prabhakaran. The film features Velu Prabhakaran, Shirley Das, Preity Rangayani, Babilona, and Stefi in the lead roles, with Jai Rathan, Adhiroopan, Sampath Ram, Srilekha, Saakshi Siva, and Suruli Manohar playing supporting roles. The film, produced by J. Satish Kumar, had musical score by Ilaiyaraaja. After years of struggle with the Indian censor board, the film was released on 17 July 2009 amid a controversy over its adult content. The film was also dubbed into Telugu as Manmadhulu. In 2017, Velu Prabhakaran married Shirley Das.

Film director Velu Prabhakaran has directed a controversial film containing nudity, and the censor board banned the release of the film; thus, Velu Prabhakaran is caught in legal battles to release the film. One day, after a court hearing, goons attack Velu Prabhakaran, and he is rushed to the hospital in a serious condition. The police investigate the murder attempt and a female journalist (Stefi) who has recently interviewed Velu Prabhakaran is interrogated by the police. A few days ago, Velu Prabhakaran told her the story of his film who was about three women - Raani (Shirley Das), Thangam (Preity Rangayani) and Saroja (Babilona) - who hailed from the village Vishnupuram. The three women have one common issue: lust.