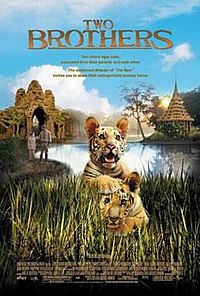 Two Brothers is a 2004 adventure drama film directed by Jean-Jacques Annaud. Starring Guy Pearce and Freddie Highmore, it tells the story about two Indochinese tiger brothers named Kumal and Sangha, who are separated from their parents as cubs and then reunited a year later as adults. It was distributed by Pathé in Europe and Universal Pictures in other countries worldwide.

In 1920s Cambodia during the French colonial rule, two Indochinese tigers, a male and a female, meet each other and mate after becoming love interests. Months later, the tiger couple have given birth to two male tiger cub brothers.