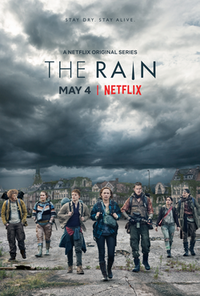 When a virus that is carried by rainfall wipes out almost all humans in Scandinavia, Danish siblings Simone and Rasmus take shelter in a bunker. Six years later, they emerge to search for their father, a scientist who left them in the bunker but never returned. Along the way, they join a group of young survivors and together they travel across Denmark and Sweden, searching for a safe place, and for the siblings' father, who may be able to provide answers and a cure.