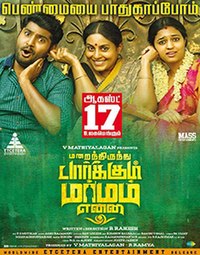 Marainthirunthu Paarkum Marmam Enna is a 2018 Indian Tamil-language thriller film written and directed by R. Rahesh. The film stars Dhruvva, Aishwarya Dutta, Saranya Ponvannan in the main lead roles while J. D. Chakravarthy, Radha Ravi, Manobala play supportive roles in the film. P. G. Muthiah serves as the cinematographer for the film. The music for the film is composed by Achu Rajamani. The film underwent censorship issues before its theatrical release on 17 August 2018. The film received average reviews from the audience upon the release.

The plot of the film is based on the problems with chain snatching.