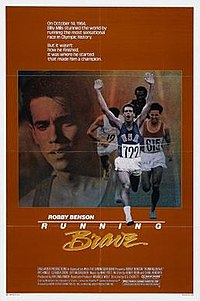 Running Brave is a Canadian biographical sports drama film released in 1983 based on the story of Billy Mills, a member or the Oglala Sioux tribe located in South Dakota. Mills was born on the reservation, and later attended the University of Kansas where he was recruited by the Olympic running team and won the gold medal in the 1964 Tokyo Olympics for the 10,000 meter race. In one of the great upsets in sports history, Mills sprinted from third place for the win. Mills is still the only American in history to win the Olympic 10,000 meter run. Robby Benson portrays Mills. Pat Hingle and a young Graham Greene also star.