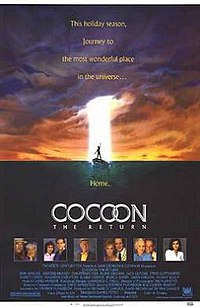 Cocoon: The Return is a 1988 American science fiction comedy-drama film directed by Daniel Petrie and written by Stephen McPherson. The film serves as the sequel to the 1985 film Cocoon. All of the starring actors from the first film reprised their roles in this film, although Brian Dennehy only appears in one scene at the end of the film. Unlike its predecessor, the film was neither a commercial nor a critical success.

Five years after they left Earth following a failed rescue mission, the Antareans return to rescue the cocoons that were left behind. Before they can be retrieved, one of the cocoons is discovered by a science research team and taken to a secure laboratory for testing. The aliens and their human allies must find a way to retrieve the cocoon in time for their rendezvous with the rescue ship, while the humans travelling with them must decide whether to return to Antarea or stay on Earth and become mortal again.