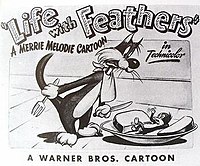 Life with Feathers is a 1945 Warner Bros. Merrie Melodies animated short film directed by Friz Freleng. The short was released on March 24, 1945, and was the first cartoon to feature Sylvester the Cat.

A lovebird decides to commit suicide after his wife kicks him out of their nest and gets a cat named Sylvester to eat him, but he thinks the bird is poisonous and refuses to eat him. For the rest of the cartoon, the lovebird attempts to get Sylvester to eat him many times. The cartoon ends with the lovebird getting a telegram saying his wife is moving out, so he escapes from Sylvester in order to keep himself from being eaten. When he gets home, he finds out she has decided to stay, and he starts looking for the Sylvester again in order to get himself eaten.