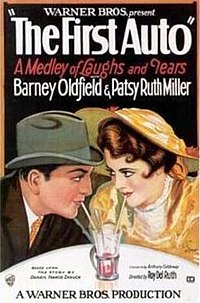 The First Auto is a 1927 film about the transition from horses to cars and the rift it causes in one family. It stars Charles Emmett Mack and Patsy Ruth Miller, with Barney Oldfield having a guest role in the movie. While mainly a silent film, it does have a Vitaphone sound-on-disc soundtrack with a synchronized musical score and sound effects, as well as three spoken words and some laughter.

In 1895, champion horse racer and livery stable owner Hank Armstrong (Russell Simpson) is greatly disturbed by the advent of the "horseless carriage" in Maple City. He mocks Elmer Hays, a car manufacturer, when he states in a public lecture that the days of the horse are numbered and that a car will one day go 30 miles an hour. However, Armstrong's efforts are in vain. He quarrels with his friends when they start purchasing the machines and is only stopped from horsewhipping his own car-mad son Bob (Charles Emmett Mack) by the timely appearance of Bob's girlfriend Rose Robbins (Patsy Ruth Miller).