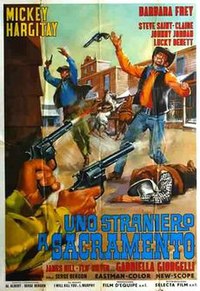 Stranger in Sacramento or Uno straniero a Sacramento is a 1965 Italian Spaghetti Western film directed by Sergio Bergonzelli. It was based on the novel I Will Kill You Tomorrow by Jim Murphy.

During a cattle drive Mike Jordan finds his father and brothers murdered and the herd stolen. He is met with suspicion by the local sheriff and population. Eventually, Mike is able to expose the rancher Barret as the perpetrator. He is assisted by Lisa, Barret's former sister-in-law, and Chris, a wanted horse thief.