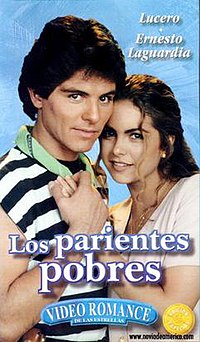 Los Parientes Pobres (Poor Relatives) is a Mexican telenovela produced by Carla Estrada for Televisa in 1993. Lucero sang the main theme and it was an airplay hit in all Latin America. It was never released as a single, but it appears in the special album Lazos de Amor and her Lucero album known as Veleta.

Two families, the Santos and the Olmos, face a fight of power, ambitions, selfishness and love. The Santos are provincial family that has a pottery factory with financial problems, which Ramiro Santos (Rogelio Guerra) manages along with his cousin Evaristo Olmos (Joaquín Cordero). However, this business deal finishes due to personal differences, this provokes the rancor and hate of Ramiro, and his family goes into bankruptcy, while Evaristo Olmos achieves an excellent status.