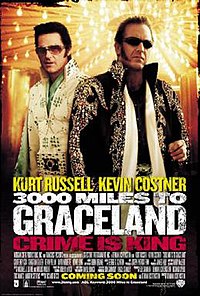 3000 Miles to Graceland is a 2001 American black comedy crime film directed, co-produced by Demian Lichtenstein. The script was written by Richard Recco and Damien Lichtenstein. It stars Kurt Russell and Kevin Costner with supporting roles Courteney Cox, David Arquette, Bokeem Woodbine, Christian Slater, and Kevin Pollak. It is a story of theft and betrayal, revolving around a plot to rob the Riviera Casino during a convention of Elvis impersonators.

Recent parolee Michael Zane stops at a run-down desert motel outside Las Vegas, Nevada. He catches a boy, Jesse, stealing from his car, and chases him back to his mother, Cybil Waingrow, who he seduces.